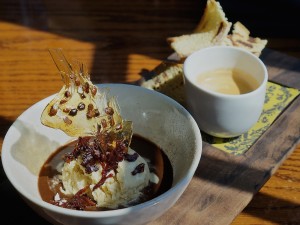 No Easter egg hunt or Easter bunny today, but I did have an incredibly decadent brunch at Owen & Engine, truly one of the most underrated restaurants in Chicago. There’s not much foot traffic there on Western and it’s certainly a little out of the way for most tourists to visit but it’s one of my favorite Sunday brunches in the city. They have a strong following of local regulars though, and deservedly so.

Owen & Engine has had a signature seasonal cinnamon roll topped with a dollop of foie gras frosting on the menu for a few months. Now foie gras makes a second appearance on the sweet side of Owen & Engine’s menu, in a playfully meaty play on the classic Italian affogato with foie gras ice cream in place of the standard vanilla. I predicted seeing more foie gras in desserts as a trend this year so I’ll be keeping my eye out for more examples. Are there any other foie gras desserts in Chicago or elsewhere that I need to try? Please leave me a comment and let me know. Although it sounds odd, I’ve found it’s a really interesting substitute for butter, cream and fat in sweets.

In this affogato, I loved the blend of smoky savory foie gras ice cream and bittersweet chocolate sauce. The melty mess was punctuated by dried cherries soaked in chocolate bitters, while dehydrated cherry biscotti were a light and crunchy sprinkling of texture on the side. We should keep our eyes on Pastry Chef Angela Diaz and the desserts she’s putting on the menu at Owen & Engine.

Her new brunch pastry board is a decadent force to be reckoned with as well. A super sweet and juicy blueberry cinnamon roll is topped with their signature foie frosting and there are also grapefruit muffins, a hot cross bun, espresso glazed doughnut and for the savory side, an impeccably laminated ham and cheese croissant that rivals the one at Tartine. Accompaniments include housemade cottage cheese (they make their own goat cheese, ricotta and paneer as well), beet relish and candied kumquats.