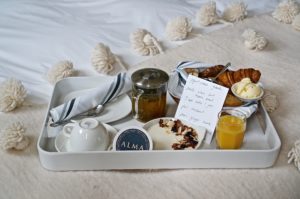 There’s nothing like Hotel Alma in Minneapolis. The city has so many new hotels opening in advance of hosting the Super Bowl next year, but nothing with the soul and one-of-a-kind charm that Hotel Alma embodies. The building was a former firehouse in the oldest riverfront neighborhood in Minneapolis. It has a Relais & Chateaux ethos – fantastic restaurant first, with a few beautiful rooms attached – combined with a rustic Midwestern sensibility.

Owner Alex Roberts is nominated for an Outstanding Chef James Beard Award this year. Previously, he won the Best Chef Midwest honor in 2010. Roberts opened Restaurant Alma in 1999, moving back home after working in New York under chefs like David Bouley and Tom Colicchio. I feel the same warmth here as at Gramercy Tavern, one of my favorite  New York City restaurants that Roberts helped open as saucier. My hotel stay and dining experiences at Hotel Alma are imbued with Danny Meyer’s brand of hospitality.

Roberts likes the comparison. He’s striving to achieve the highest quality in service, ingredients and amenities while retaining a casual, comfortable vibe. The staff has tripled since he opened the hotel and cafe and Restaurant Alma is busier than ever.

When I step into the hallway late afternoon, I smell simmering onions from the kitchen below and smile. I remember when I was a little girl coming home from school, taking off my boots and trying to guess what my mom was preparing for dinner based on the savory smells drifting from the kitchen.

You’ll certainly eat well here. In-room snacks include local single-origin bean-to-bar chocolate from K’ul Chocolate. Complimentary continental breakfast of tea or coffee and bread or pastries is delivered to your door in the morning. Even after a sumptuous dinner at Restaurant Alma, I eagerly fill out my card. As I hang it outside my door, I’m already anticipating Pastry Chef Carrie Riggs‘ treats the next day. 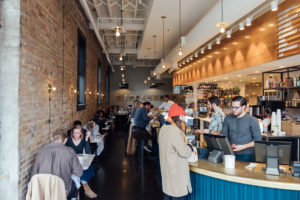 With the new all-day European-inspired cafe next door, Riggs’ workload has ballooned. Restaurant Alma has always made its own bread, but now they are churning out 60 loaves a day on a busy weekend. Not to mention a number of ever-changing sweet and savory pastries. Sesame seed bread and a savory sweet potato and bacon galette were standouts on my visit.

For dinner, head to Restaurant Alma next door and ask for Table 100. This corner booth next to the bar is the best and most romantic seat in the house. The three-course prix fixe completely changes each season, so I won’t make any specific dish recommendations. Just know that everything, from bison tartare with sesame teff crackers to poblano crusted sturgeon with roasted salsify, was delicious.

Although I visited in February, weather was positively balmy. But I can imagine on a sub-zero winter day, there’s nowhere in Minneapolis I’d rather be than sheltered in a snug nook at Hotel Alma with a croissant and coffee. 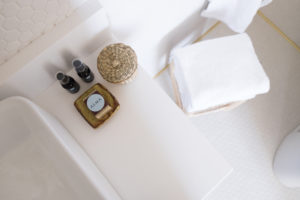 Rooms: 7 rooms, including one wheelchair-accessible room on the ground floor. I stayed in Room 5, the largest room, a junior suite.

Vibe: Clean, natural and cozy. Exposed brick walls juxtapose with white hexagon honeycomb tile in the bathrooms. From the single fresh daffodil on the table to the felted slippers and pom pom throw on the bed, every detail is precise and thoughtful.

Design: All the furniture is made by Minneapolis local Marvin Freitas and the rooms are designed by Talin Spring, who also makes leather handbags and accessories under the Spring Finn & Co label.